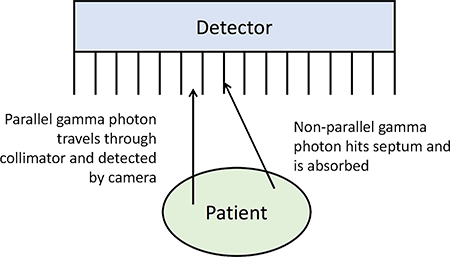 When radiation is released from the patient it can exit at any angle and hit the detector in a location that doesn’t correlate with the location of its origin. To overcome this, a collimator is used in which only gamma photons that travel parallel to the collimator will be accepted. Those travelling at an angle will hit the septum (usually lead), be absorbed and, therefore, not contribute to the image.

N.B. The collimator acts as a lens to reject photons that have a path that means they do not hit the camera in a location that corresponds to their original location i.e. its purpose is for spatial mapping. It does not reject scatter.

Features of the collimator 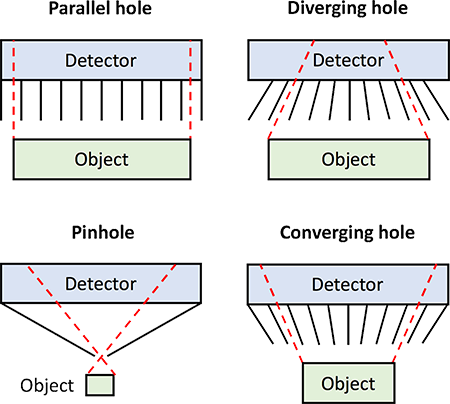 The holes can be created by:

The higher the energy of the emitted gamma photons the thicker the septae need to be to ensure maximum absorption of photons that hit them at an angle and, therefore, better rejection of non-perpendicular photons. Parallel hole collimators are classified as low, medium or high energy according to their septal thickness. 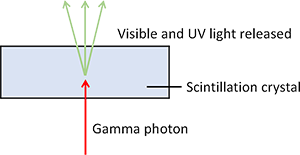 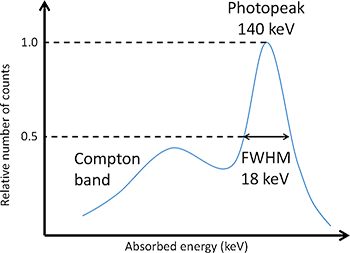 For each scintillation formed, the calculated absorbed energy (Z value) that caused it depends on the energy of the gamma photon that was emitted from the patient and the proportion of the energy that was absorbed into the crystal.

The gamma photon energy absorbed by the scintillation crystal depends on its interaction with that photon which results in a spectrum of Z values.

The spectrum has a peak (photopeak) that corresponds to the maximum gamma photon energy (for 99mTc this is 140 keV). The Compton band corresponds to photons that have undergone Compton interactions and, therefore, have a lower absorbed energy.

The photopeak should be very narrow but a variety of factors means that it often isn’t. The width of the photopeak is measured as the full width at half maximum (FWHM). This value is used to calculate the energy resolution of the crystal, which is given as a percentage:

If a gamma photon scatters within the patient’s body (via Compton scatter) it will change direction and, therefore, will not hit the detector at a location corresponding to its location of origin. It is important to reject these scattered photons as they degrade the image contrast and spatial resolution. This cannot be done by the collimator and is, therefore, done electronically by a process called energy discrimination.

Gamma photon energies within the Compton band can be due to:

Unfortunately these are indistinguishable and so energy discrimination will remove both the lower energy unscattered and scattered signals.

Each PMT corresponds to a coordinate on the scintillation crystal. This is then mapped out onto a matrix. Each time a gamma photon that falls within the acceptable energy window is detected it is mapped on to its corresponding coordinate within the image.

Image acquisition is controlled by the user and may be terminated when:

The digital image is displayed upon a monitor with each pixel corresponding to a memory location in the matrix and the brightness / colour scale corresponding to the count number in that location.

Display can be manipulated and optimised by: