The local field is most commonly distorted by metal present in the object which causes two types of artefacts: signal loss due to dephasing and distortion. An air-fluid interface can also cause similar inhomogeneities. 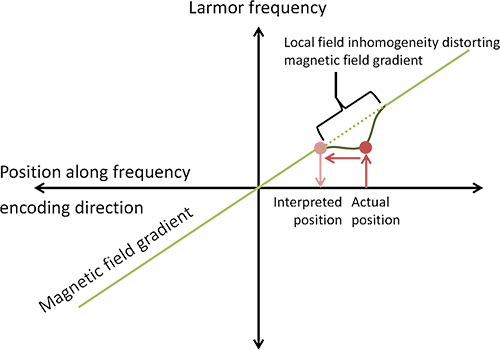 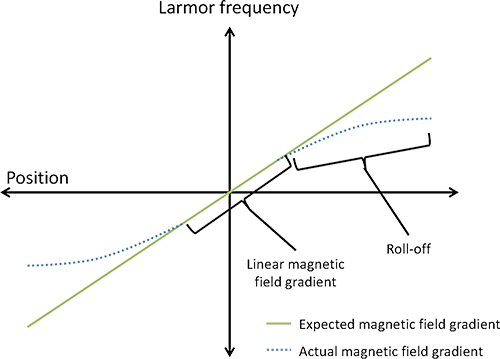 The gradients used in spatial encoding are meant to be linear but often they roll off from the straight line towards the edges of the FOV. The distortion created occurs in both the frequency- and phase-encoding directions.

The most common two substances in the human body are water and fat. Protons in water and fat will resonate at slightly different Larmor frequencies despite being in the same position in the magnetic field gradients. There are two artefacts that are produced by this property when protons from these two tissues are in close proximity: chemical-shift and fat/water cancellation. 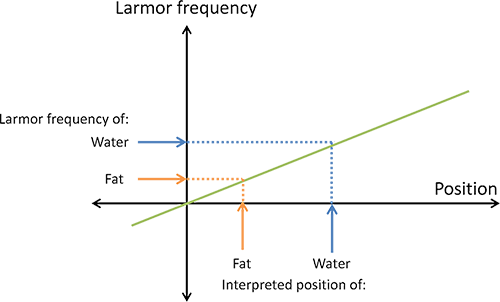 Protons in fat and water resonate at slightly different Larmor frequencies. This means that even when they exist in the same position they will be interpreted as being in slightly different positions in the frequency-encoding direction which uses the precessing frequency to encode position.

As protons from fat and water have different Larmor frequencies they will go in and out of phase over time. If a voxel contains both fat and water the signals from the two may cancel each other out if the TE of a certain length is used (2.24 ms at 1.5 T). This creates a signal loss with a black line between tissues that contain both fat and water.

This is used in liver MRI out-of-phase imaging as fatty infiltration results in cancelling of the signal helping with diagnosis.

Fat saturation imaging exploits the different Larmor frequencies of fat and water by applying a narrow RF pulse centred over the fat peak that nulls the signal. If the frequency of the fat peak is slightly different – most commonly due to anatomy with a rapidly changing contour (e.g. ankle and foot) or non-linearity of the magnetic field gradient at the periphery of the image as explained earlier – the RF pulse will not be positioned over the fat peak any more and will fail to null the signal.

RF coil elements can be switched on and off depending on the FOV required.

RF signals arising from outside due to an inadequately shielded MRI room or inside from faulty equipment will contribute to the image. A band of noise will appear in the image in the phase-encoding direction depending upon the frequency/frequencies of the external RF signal.

Signal from structures that lie outside the FOV in the phase encoding direction will be aliased back onto the image (aka phase wrap).

Imaging an edge boundary can create a Gibbs or edge ringing artefact. The more data points that are acquired the better the boundary edges are represented. However, at the edges of the image the extra data points create superimposed waves which are encoded into the image. This is of particular importance in imaging the spine in which encoding the edge boundary between the spinal cord and CSF can create artefactual lesions within the cord.

In EPI the whole of the k-space is acquired in one RF excitation resulting in very rapid imaging. The horizontal acquisition is very quick but the vertical acquisition is slower. This difference leads to distortion, especially where there are small local magnetic field inhomogeneities such as around the nasal cavity or the orbits.

A low intensity copy of the image which is shifted by half the FOV in the phase encoding direction can occur which is due to misalignment of echoes as the k-space is acquired back and forth.

Multiple lines of the k-space are acquired after a signal RF excitation as explained in Spin echo sequences – Detailed. The number of lines acquired per TR (or echo-train length, ETL) can be very long to the point that the whole of k-space is acquired in a single TR (single-shot FSE). However, over time there will be T2 relaxation that will cause blurring in the image in the phase encoding direction.

In SSFP imaging if there are local magnetic field inhomogeneities this can produce a banding pattern on the image with signal void and stimulated-echoes that constructively and destructively interfere.