A pleural tap (thoracocentesis) to obtain a sample of fluid for laboratory testing can be performed easily under ultrasound guidance.

Appearance: Fluid density at the dependent part of the hemithorax. i.e. at the bases in erect CXR; posteriorly in supine CT. Causes collapse of adjacent lung which appears denser (white).

Lymphadenopathy is enlargement of lymph node due to pathology. Definition of enlargement: >1 cm in the short axis (i.e. width, not length)

The lungs are a common site for metastases, in particular from breast, bowel and renal primaries.

Appearance: Soft tissue nodules, usually multiple, located anywhere within the lung fields, but classically more in lower zones. Can measure anywhere from a few mm to >1 cm in diameter. Large “cannonball” metastases classically originate from a renal cell carcinoma primary. Metastatic nodules can occasionally be cavitating, particularly with squamous cell lesions, although if cavitation is seen, infective causes must be considered.

To differentiate small nodules from pulmonary vessels and lung parenchyma, ‘follow’ it by scrolling up and down a few slices. Nodules should appear and disappear within one or several slices, while vessels should continue for some distance and branch out. 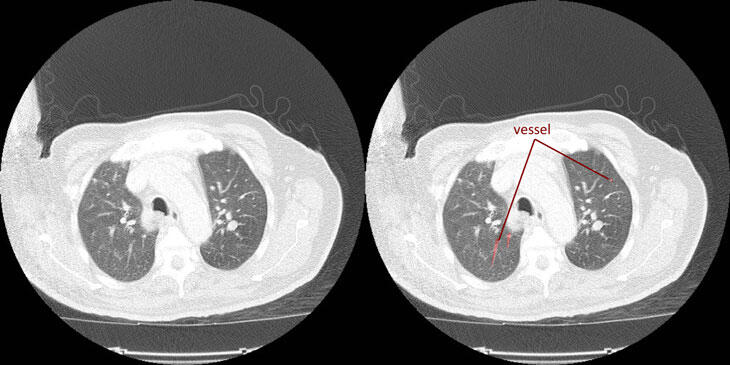 The same method is used to differentiate lymph nodes from vessels, e.g. in the axillary region.

Malignancy of B or T lymphocytes, with solid lymphoid tumours. It can involve nodal and extranodal sites. Subtypes include Hodgkin and Non-Hodgkin.

Staging is performed with a CT scan or a PET scan, using the Ann-Arbor classification.

Causes of hilar lymphadenopathy on CXR: Lymphoma, TB, Sarcoidosis. (Note: Both Lymphoma and TB can cause the ‘B symptoms’!)

In the coronal CT image below, you can see a massive number of enlarged lymph nodes in the cervical and axillary areas.

Bronchiectasis is fixed dilation of part of the bronchial tree.

Extrinsic (occupational) and Intrinsic (autoimmune) causes result in different typical patterns of fibrosis, where the lung apex or base is more affected.

Appearance: Reticular shadowing; Honeycombing; Traction bronchiectasis. These are seen best on high-resolution CT but may also be seen on CXR.

Emphysema is one of the two main entities of chronic obstructive pulmonary disease (COPD), the other being chronic bronchitis.

There is destruction of alveolar walls, resulting in enlargement of airspaces. These become confluent and eventually form bullae. Bullae can rupture, leading to pneumothorax and pneumomediastinum. CXR findings include hyperinflation, flat diaphragms, and bullae.

Pneumothorax can be primary or secondary to underlying lung pathology.

It is usually diagnosed on CXR, but may also be diagnosed on CT if unsuspected previously and a CT was performed to exclude other causes of chest pain.

Appearance: A pocket or rim of air located outside the lung and adjacent to the chest wall, most commonly in the apices. Associated lung collapse. Only visible on lung window.

Clear guidelines exist regarding the use of imaging in the investigation of suspected pulmonary embolism.

In pregnant women, D-dimers are unreliable and Wells’ score is not validated. Consider performing duplex ultrasound for DVT, and CXR to exclude other causes. V/Q scan (or perfusion-only scan) is generally favoured to minimise radiation exposure. The main concern with CTPA in pregnancy is the radiation to the mother’s breasts (as the fetus can be shielded), and the iodine dose to the foetus (needs thyroid screen when born).

On V/Q scan, ventilation (inhaled tracer) is normal but perfusion (IV tracer) is abnormal, indicating a problem with the blood supply to a particular area.

The images below show the emboli highlighted in red. The first two images show multiple bilateral emboli, while the third image shows a saddle embolus. ‘Saddle’ embolus sits in the bifurcation of the pulmonary trunk where it divides into the left and right main pulmonary arteries.

Aortic dissection occurs when blood enters the aortic wall through a tear in the tunica intima, ‘dissecting’ a path (false lumen) between intima and media. If the dissection extends into smaller arteries (e.g. coronary, carotid, subclavian, mesenteric), it can cause ischaemia of the supplied area (i.e. MI, stroke, limb ischaemia, bowel ischaemia). Pericardial tamponade can also occur. The main risk factor is hypertension.

Classification systems are Stanford and DeBakey, both based on involvement of the ascending aorta (poorer prognosis).

Appearance: There is a true lumen and a false lumen, separated by an intimal flap (tunica intima which has been detached from tunica media). The false lumen is usually larger (higher pressure) and hypodense (darker as contrast delayed) compared to the true lumen, although this is not reliable. To differentiate them with more certainty, a normal part of the aorta should be found and followed as this will join into the true lumen.

The video below shows a dissection involving the ascending aorta (anterior), the aortic arch, and the descending aorta (posterior). Here the false lumen is brighter than the true lumen, which is not typical.